Listen to Healthy Matters on WCCO Radio Sunday, August 2 at 7:30 AM when Dr. Brunette discusses his trip to Kazakhstan.

Dr. Douglas Brunette was invited by his former student, astronaut Dr. Kjell Lindgren, to watch his launch to the International Space Center from the Cosmodrome in Kazakhstan on Wednesday, July 22. Here are some of the daily posts Dr. Brunette is sending from his trip.

7/23/15
We watched the docking with the ISS live, followed by the hatch opening. It was great. Kristi (Kjells wife) and their kids had a live video conversation that was great to witness. 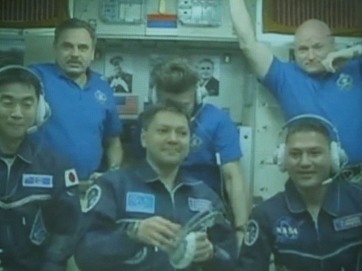 Not a cloud in the sky. The ISS passed directly overhead, and 30 seconds later the rocket lit up to go and chase it. Deafening sound, lit up the pitch black sky, physically rattled your chest.

We were able to track it all the way to loss of second stage rockets, which meant they were in space. Then we toasted Russian vodka…

We leave for Mission Control in a couple of hours to watch the docking with the ISS and then the hatch opening to greet Kjell aboard the ISS.

Per Kjells recommendation, I did not photo the launch. He told me to sit back and enjoy it, which is what I did. It will be available on NASA.gov.

Launch was textbook with the exception of one solar array that did not deploy, which is a minor issue that can be dealt with after they dock.

Matt Herold is the person in the photo with me, an HCMC classmate of Kjell.

10:46 AM I have so much to write, but very little time. Attached are photos of the crew getting onto the bus that will be taking them to the launch site.

One of these photos is Kjell from inside the bus making his hands into a heart for his children, telling them he loves them.

One tradition is for each astronaut to plant a tree. There is impressive walkway of trees dating back to the first person in space, Yuri Gagarin. Kjells tree is obviously small and has a lot of growing to do! 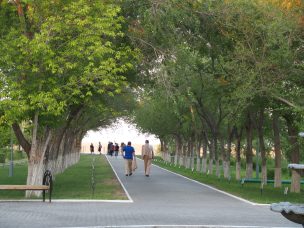 7:46 AM Update since my recent last post. Typical Kjell…just hours from being hurled into space he sends me a very personal email the content of which I will mostly keep to myself.

However, he specifically stated he is extremely grateful for the support and interest that HCMC has demonstrated during these last few months, and considers himself humbled and privileged to have trained at HCMC, and thanks everyone for their support.

It has been a clear, no clouds in the sky day, which should make for a beautiful launch. We will wave to Kjell when he exits the Cosmonaut Hotel, which is next to our hotel within the Cosmonaut Space Center.  We drive to Building 254 which is near the launch site (I think that’s the number), and again wave to Kjell when he exits wearing his full spacesuit en route to the launch pad.

At around midnight we apparently will be having a feast of a dinner meal before the 3am launch. Kjell will be spending close to 3 hours on his back in a fetal position, wearing his spacesuit, going through a very long pre-launch checklist.

We will be outside to watch the launch, approximately 0.7 miles from the launch pad. NASA shuttle launch viewing was from 3 miles, so this should be quite a show!

Post launch I think I will have some time to email photos before we go to Mission Control for watching the docking to the ISS and hatch opening.

Hope all is well. I have decided I would rather live on the frozen tundra (Minnesota) than the searing desert plains…

7/21/15
Low key day today. Toured space museum, lots of interesting fun facts, but hard to understand many exhibits as they were in Russian. 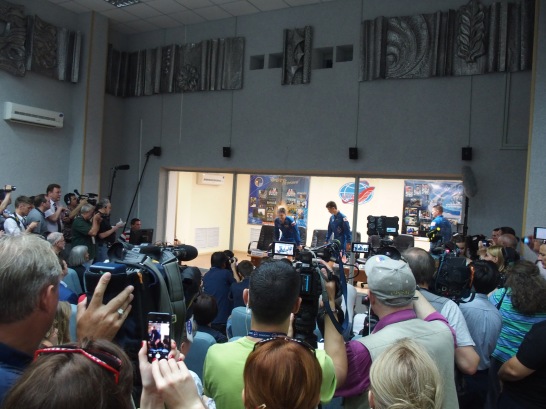 So internet access will be a problem for me tomorrow. If I cant send anything, I will report in the day after the launch.

7/20/15
Great and fascinating day. Got up early to see the rocket roll out of the hangar. It was placed horizontally onto a train, and moved about 0.5 miles to the launch site. We were 10 yards away from the railroad tracks when it passed. Unbelievable sight. 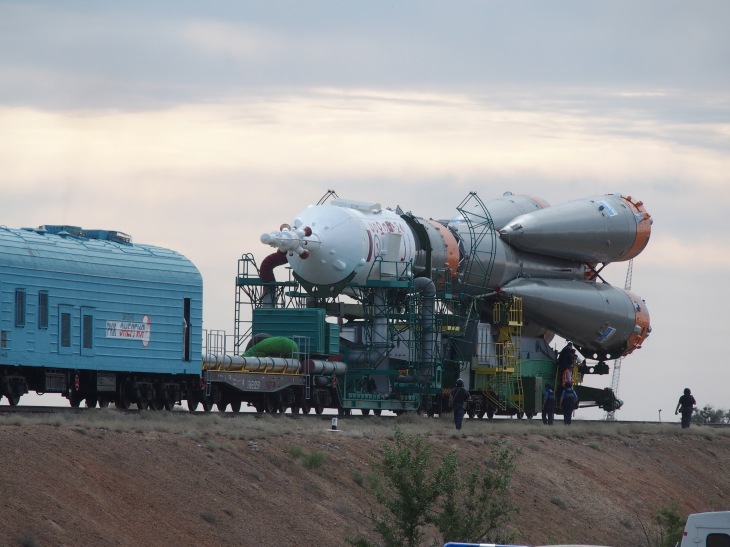 Went to the launch site, and it was raised vertically into blast off position, where 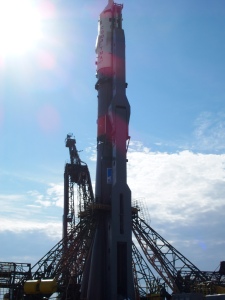 we stood just a few yards away.

Then had a private meeting with Kjell. Just his family (mom, dad, sister, his kids, and Matt and myself) . Kjell was behind glass partition re: quarantine. We met with him for an hour. It was funny at times, very emotional at times for all in the room. It was a wonderful hour.

The launch is 3 am Kazakhstan time on July 23rd, and we are 11 hours ahead of you. So launch for you will be 4 pm Wednesday, July 22nd.

We will be up for 30 straight hours or so on launch day. More on that later.

7/19/15
Day 3. Long day. Left hotel at 5am to airport for three hour flight into Baikonur, Kazakhstan. It is about 100F today. It is a desert, at least the part of the country that we are in. We are staying at the Sputik Hotel.

Kristi Lindgren and Kjell’s parents are going to see Kjell tonight. They will get to see him one more time about 5 hours before launch. None of the rest of us are allowed to see him.

We get up again early tomorrow, I think around 5am to go watch the rocket rollout of the hanger and head to the launch pad.

The airplane we flew in and a view of the terrain right before we landed: 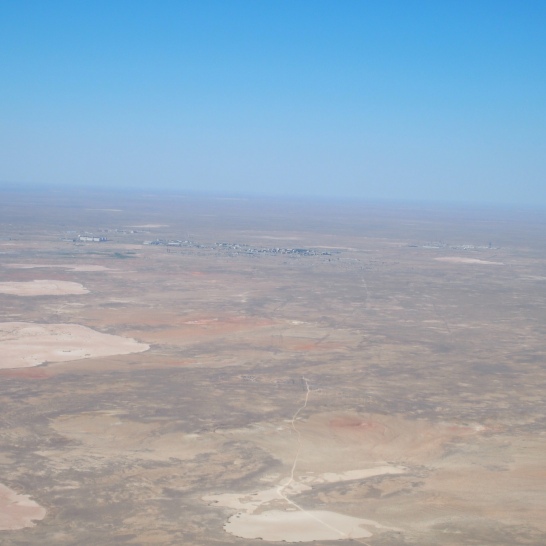 Terrain from flight to Baikonur, Kazakhstan

7/18/15
We went to Star City today, which is where the astronauts and cosmonauts train. Fascinating. We also ate ISS freeze dried food – not so good…

We skyped with Kjell today — he is ready to go. We leave on 3-hour flight tomorrow morning to Kazakhstan.

Attached are some photos of the capsule that Kjell will be sitting on his back in during launch. Quite small a space. This is the training capsule, just like the real deal. 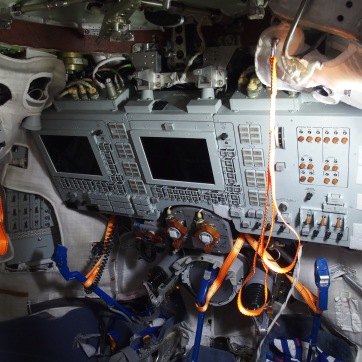 Took a tour with our NASA astronaut guides of Red Square (see photo of St. Basil Basilica, built by Ivan the Terrible).

Went to dinner last night with Kjell’s parents and sister, and communicated with Kjell via email from the dinner table.

Kjell is in quarantine, so he does not get ill before launch. Everything is still a go. Kjell puts on his spacesuit today and climbs aboard the rocket capsule to get another feel of it.

We are traveling to Star City, Russia, about one hour outside of Moscow today. It is where NASA astronauts train in Russia.

Tomorrow we have an early chartered NASA flight, 3 hours, to Baikonur, Kazakhstan where the launch will take place at 3am local time on July 23rd.

Excitement is building at Hennepin County Medical Center (HCMC) as they count down the days to NASA’s Expedition 44/45 launch on Wednesday, July 22. The Soyuz spacecraft will carry a crew to the International Space Station that includes astronaut Kjell Lindgren, MD who completed his medical residency in HCMC’s Emergency Department where he was also Chief Resident.

Dr. Lindgren will serve as flight engineer for this mission, which was originally scheduled to launch on May 25, but was delayed after an unmanned Russian cargo spacecraft failed to reach the International Space Station (ISS) on April 30. An investigation into the malfunction had to take place before Expedition 44/45’s launch could be rescheduled.

“Of course we were concerned about Kjell’s mission after hearing about the Progress 59P problem,” explains Dr. Douglas Brunette, referring to the cargo spacecraft that eventually burned up after re-entering the Earth’s atmosphere. “But it’s better to be safe and wait until the cause of the problem was figured out, and we had every confidence that the launch would be rescheduled.”

Dr. Brunette supervised Dr. Lindgren’s medical training in the Emergency Department, and he was invited by Dr. Lindgren to be his guest in Kazakhstan to watch the launch from the Cosmodrome.

“I feel so honored that Kjell asked me to be there. Of course it’s a once in a lifetime opportunity for me, but to see my former resident – whom I now consider a friend and colleague – fulfill his dreams of being an astronaut, it’s just so exciting,” said Dr. Brunette, who leaves for Kazakhstan on July 16.

Hospital employees are counting down the days to the launch with posts on social media and even a Russian-themed menu in the cafeteria. For more information about NASA’s Expedition 44/45 as they prepare for their launch, go to: https://blogs.nasa.gov/spacestation/