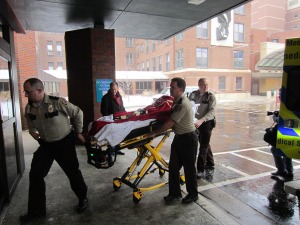 On Monday, January 23, Jack Jablonski was transferred from Hennepin County Medical Center (HCMC) to Sister Kenny Institute  for rehabilitation by the two paramedics who were on duty when the 16-year-old was injured.

On December 30, HCMC paramedics Scott Brethorst and Geoff Antonenko responded to a call from St. Louis Park Rec Center, where a hockey player was down after being checked. The paramedics immediately went out on the ice to care for Jablonski. “There are certain types of calls we remember for the rest of our lives, ” explains paramedic Scott Brethorst. “And this was one of them.”

“I remember Scott gave me a look that said, ‘this is serious,'” said Antonenko.

Jablonski spent the next 24 days at HCMC, where his room took on the look of a pro shop with autographed jerseys and memorabilia from sports teams  and celebrities throughout the country.

Emergency Medical Services supervisor Wade Johnson, who is also the coach of the Hennepin Generals hockey team, heard of Jablonski’s pending discharge and knew that Brethorst and Antonenko would like to see him before he left HCMC.

“One of our new ambulance rigs was arriving on Monday morning, so we arranged it so that the two paramedics who brought him to HCMC in December could bring Jack to the next part of his journey,” said Johnson.  “His story touched us all, and we wanted to do this for him.”

“We don’t often get the opportunity to follow up with the patients we care for, so it was an honor to see this courageous young man again,” said  Brethorst.  “Like I said, there are certain calls you never forget.”

View all posts by hennepinmedical